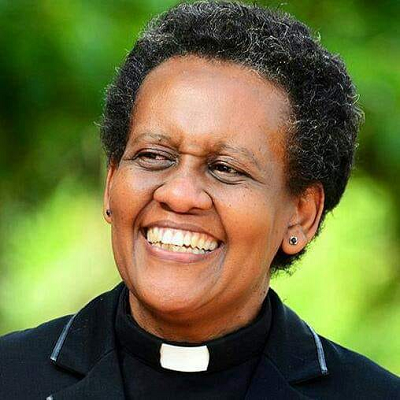 Reverend Canon Diana Nkesiga was one of the first women to be ordained by the Anglican Church of Uganda.

Diana Mirembe Barlow joined Gayaza High School in 1974, living in Sherbourne house and later Mary Stuart.  She was the deputy chairperson of the Christian Club (1978) and later became chapel prefect. (1979)

She then joined NTC Kyambogo from 80 to 83 and later posted to teach English and CRE at Gayaza High School. While there Diana was made house mistress of Sherbourne and Mary Stuart and Assistant Chaplain to Ms Ann Cutler.

In 1986 She joined Bishop Tucker Theological College for Bachelor of Divinity.

On 19 August 1989 Diana got married to Solomon; and in December 1989 became a Commissioned worker. In 1992 She became a Tutor of Uganda Martyrs’ seminary.

Diana was Ordained deacon in 1991; She was recommended for Ordination by Bishop Dlamini of the transkei and Bishop Kauma, but this was met with reluctance/resistance by the then Leadership.

Between 1992 and 2005, Diana went to South Africa, where she started a pre- school and also became an Aids Champion. Between 1997 to 2003 Rev Diana was a Chaplain to University of Port Elizabeth and PE Tecknicon.

Diana returned to Uganda and became the Vicar at All Saints’ Cathedral, Kampala  from 2007 – 2018.

She is now the Associate Chaplain at St Francis Chapel Makerere, Kabanyolo.

Diana co-founded Nkesiga Cancer Foundation in 2016 in memory of her late husband Solomon. This Organisation provides support to people affected by cancer.

She also co-founded the Phumla Retreat Centre in 2011.

Diana has won the following awards: