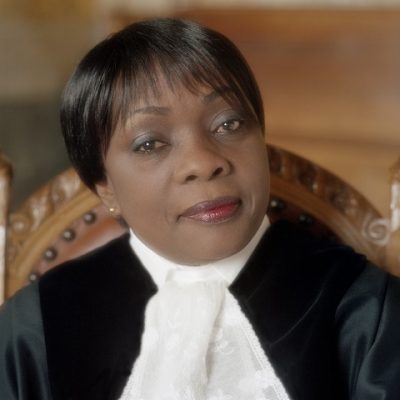 Julia Sebutinde is a Ugandan Judge on the International Court of Justice (ICJ) since 2012.

She is the first African woman to sit on the World Court in its 75-year history. She has now been re-elected to serve a second term of 9 years starting february 2021 to 2030.

Judge Sebutinde is the current Chancellor of Muteesa 1 Royal University since 2016.

In 2005 Appointed to the Special Court on Sierra Leone established by the United Nations, and went on serving as Presiding Judge in Courtroom II.

Julia Sebutinde started at Lake Victoria Primary School in Entebbe. She joined Gayaza High School in 1968 for ‘O’ levels, and Kings College Budo for ‘A’ levels.

Judge Sebutinde then joined Makerere University and obtained the degree of Bachelor of Laws (LLB) in 1977.

1978 She received the Diploma in Legal Practice from the Law Development Center in Kampala.

1991 Master of Laws (LLM) Degree from the University of Edinburgh, United Kingdom;

2009 She was awarded an honorary degree of Doctor of Laws (LLD) by the University of Edinburgh in recognition of her body of work and contribution to International justice.

exemplary service to the world.

Julia Sebutinde is the author of various papers and lectures including:

“Celebrating Ten Years of the Rome Statute: Does Uganda Have Reason to Join the Party?”(September 2008);

Judge Julia Sebutinde has received several awards, two of which are

Good Samaritan Award” at the Congress of Advocates International (2004);

Judge Julia Sebutinde is Married to Mr John Sebutinde and they have two children.