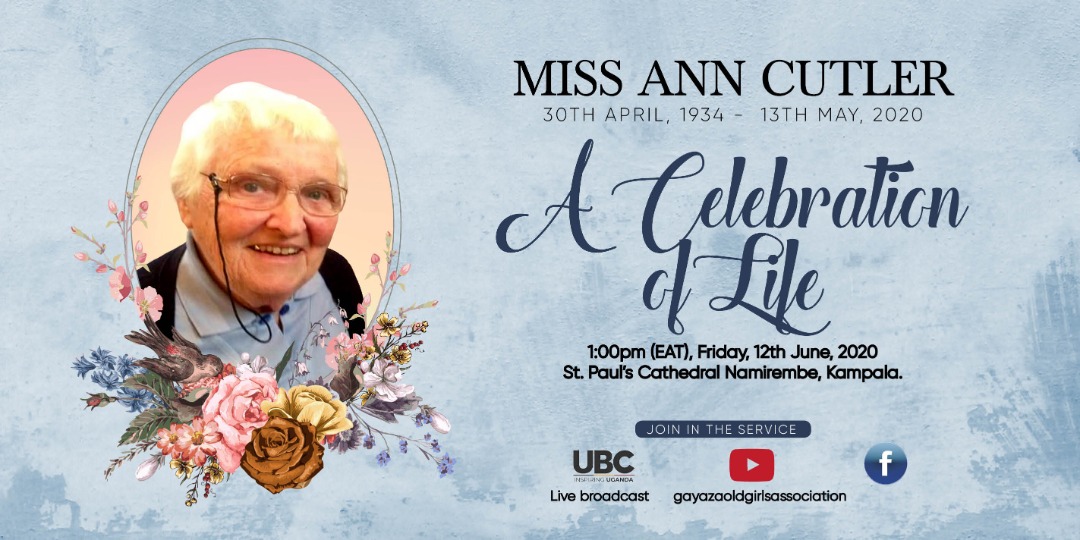 Gayaza Old Girls held a memorial service in thanksgiving for the life of Miss Ann Cutler and the 40 years of service at Gayaza High School in Uganda.

The service will be held on 12th June starting at 13.00, at St Paul's Namirembe Cathedral in Kampala , Uganda.

Ann Cutler's Portrait that was placed in Namirembe Cathedral during her memorial service.

Bishop Wilberforce Kityo Luwalira preaching during Ann Cutler's Memorial Service at Namirembe Cathedral
Luwalira delivered his tribute message during Cutler's memorial service. He described her as a virtuous teacher, who made a significant contribution to education in the diocese and the Church of the Province of Uganda.

The scientific payer service was graced by a number of prominent old girls, who also paid warm tributes to their former teacher.

The reigning headteacher, Robinah Kizito said: "Miss Ann Cutler was somebody so great yet simple in nature. She spent 40 years at Gayaza but she taught every day of her life.  She was a superb instructor of Physical Education, a versatile sports coach. She taught us various games: Netball, Hockey, Lawn Tennis, Table Tennis, Badminton, Volleyball, Javelin and Badminton.  We also remember her for the popular 'Do-si-do' Scottish Country Dance. She was an inspirational Chaplain. She always organised chaplaincy activities with total dedication. She hosted Bible Study sessions at her home for the staff members. She was a true Born-again Christian with an unquestionable dedication to God and His Kingdom. She was kind, humble and very generous. She loved deeply. She extended care to the less privileged. She had a great sense of security, always inquiring about unknown faces and activities at the school. She used to walk around the school with her dog, Chiffy, and her torch during the night, to ensure that students don't get into danger or mischief. She knew all her students by their back-side and heels.

Rev. Canon Diana Nkesiga delivered her homily during Ann Cutler's memorial service
Kizito further acknowledged Cutler's charity towards the school's needy students. She later announced a plan by the school to build a befitting monument at the school and also, to institute a sports tournament in honour of Cutler.

Other Gayaza alumni such as Prof. Maggie Kigozi and Rev. Canon Diana Nkesiga (who was the homilist) also expressed their admiration of Cutler, stressing her practical commitment to the holistic development of her students and the empowerment of Ugandan women in general.

Rev. Cannon Diana Nkesiga asked the Gayaza alumni to keep up the standards that Cutler set.

"She never gave up. Even during the bloody regimes and wars of the 70s and 80s, she never went back to the UK. She remained here and suffered with us. Let us emulate her discipline, mentorship, inspiration, courage and commitment to Gayaza and Uganda."

You can watch the Service here